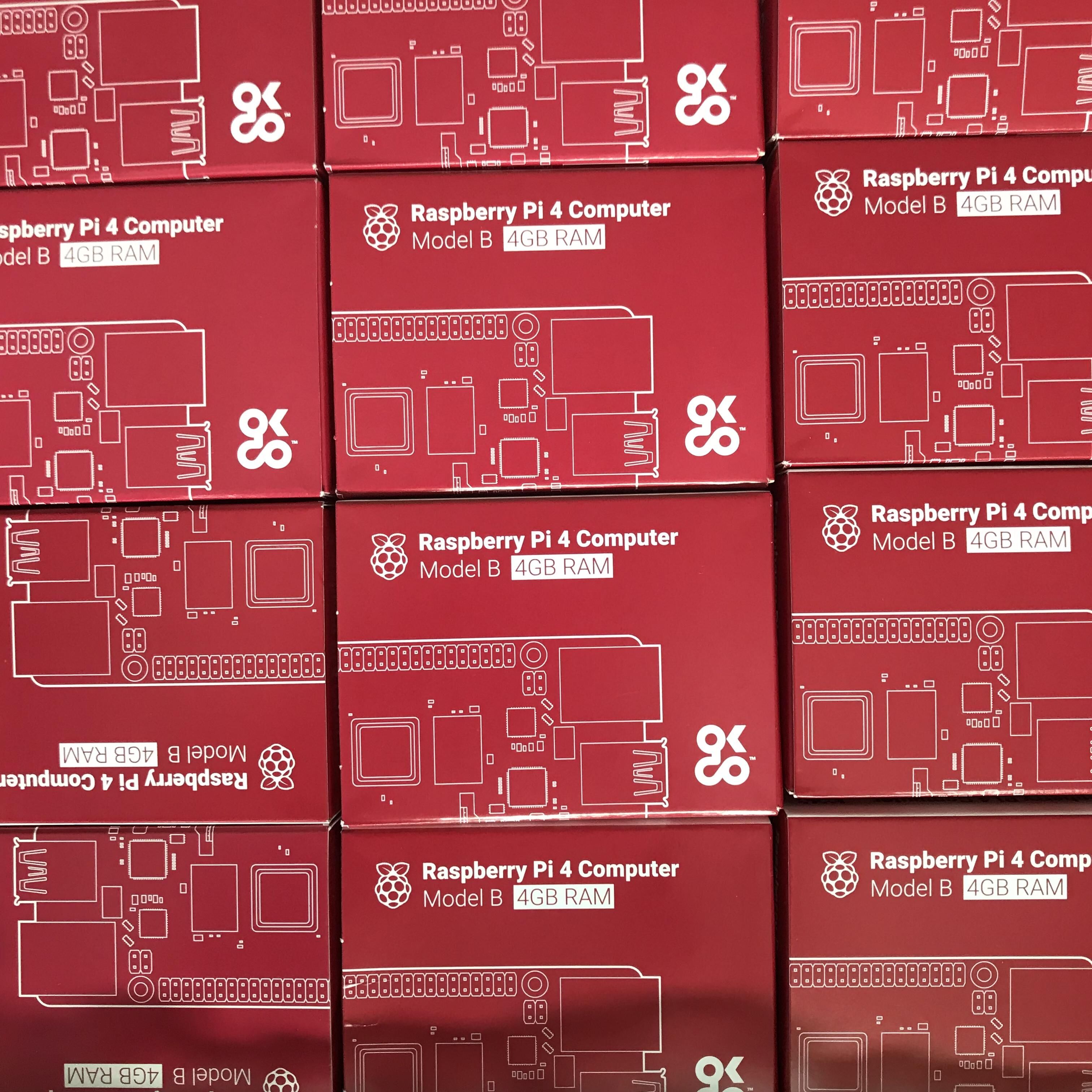 Key Differences Between Raspberry 4 Model B & Raspberry Pi 3 B+

Raspberry Pi has long been the gold standard for inexpensive single-board computing, powering everything from robots to smart home devices to digital kiosks. The long-anticipated Raspberry Pi 4 takes Pi to another level, with performance that's good enough to use in a pinch as a desktop PC, plus the ability to output 4K video at 60 Hz or power dual monitors.

The most important new features are the faster processor and GPU, more and faster RAM, the addition of USB 3 ports, dual micro HDMI ports instead of a single HDMI connection and support for 4K output. The higher bus speed that enables USB 3 support also allows the on-board Ethernet port to support true Gigabit connections (125 MBps) where the last-gen models had a theoretical maximum of just 41 MBps. The microSD card slot is also twice as fast, offering a theoretical maximum of 50 MBps versus 25 MBps on the 3B+.

Because the new SoC needs more power, the Raspberry Pi 4 B charges over USB Type-C instead of micro USB. It also requires a power adapter that can deliver at least 3 amps of power and 5 volts, though you may be able to get away with 2.5 amps if you don't attach many peripherals to the USB ports. Putting aside the power needs, USB Type-C connectors are reversible, which makes them much easier for kids (and adults) to plug in.

At 3.5 x 2.3 x 0.76 inches (88 x 58 x 19.5 mm) and 0.1 pounds (46 grams), the Pi 4 is thin enough to fit in your pocket and light enough to carry anywhere. The board is durable enough to probably survive rolling around in your bag, but we recommend sticking it in something protective, mostly to protect the pins. However, during testing, I always used the board bare on my desk and I carried it back and forth between work and home many times by simply putting it in a cardboard box with no padding or static bag.

Unfortunately, if you want a case, you can't use one that's been designed for any previous Raspberry Pi. The Raspberry Pi 3 B / 3 B+ have almost the same dimensions, but the port layout has changed just enough to make the Pi 4 B incompatible. Where prior Pis had a single, full-size HDMI port, the dual micro HDMI connectors on the Pi 4 jut out more and so don't line up with the holes on anything that was designed for the Pi 3 B.

The Raspberry Pi 4 covers more than just the basics when it comes to ports. The right side has four USB Type-A connections, two of which are USB 3.0. There's also a full-size, Gigabit Ethernet port for wired connections there. The bottom edge has a 3.5mm audio jack, two micro HDMI ports and the USB Type-C charging port. On the left side, you'll find the microSD card reader. And on the top surface of the board, you'll see ribbon connectors for the Camera Serial Interface (CSI) and Display Serial Interface (DSI), which provide dedicated connections to Raspberry Pi's own camera and screen (or compatible accessories). Of course, you can connect a camera to a USB port as well and there are a couple of more common ways, including the micro HDMI ports, to output to a screen.

The Raspberry Pi 4 has similar design and dimensions to its predecessors, but it's an all-new platform, powered by a new processor, the Broadcom BCM2711B0. Since the first Pi in 2012, all Pis have used 40nm SoCs, but this new chip is based on a 28nm process and, instead of the older Cortex-A53 microarchitecture, it uses Cortex-A72. The BCM2711B0 in the Raspberry Pi 4 has four cores and is clocked at 1.5 GHz, which at first blush, doesn't seem much quicker than the quad-core, 1.4 GHz BCM2837B0 in the Raspberry Pi 3B+.

However, Cortex A72 has 15-instruction pipeline depth, compared to just 8 on the older model, and it also provides out-of-order execution so it's not waiting for the output of one process to start on another. So, even at the same clock speed (and the BCM2711B0 is based on a smaller process node), Cortex-A72 processors will be significantly faster and use more power than their A53-powered ancestors.

For example, on the Linpack benchmark, which measures overall compute power, the Pi 4 absolutely whooped the Pi 3 B+ in all three tests. On the all-important single precision (SP) test, the Pi 4, scored 925 as compared to the 3 B+'s mark of 224, a boost of 413 percent.

On the Sysbench CPU test, the Pi 4 B was capable of performing 394 events per second as compared to 263 for the Pi 3 B+. That's a difference of 50 percent.

The RAM is also quite a bit quicker, going from 1GB of DDR2 RAM operating on the Pi 3B+ to up to 4GB of DDR4 RAM. In addition to the increased bandwidth, having more memory is a huge deal, particularly for web surfing.

Both the CPU and the RAM are implicated when you do file compression. When zipping a file in multithreaded mode, the Pi 4 B is 37 percent quicker than its predecessor, but it's far stronger in single-threaded, eclipsing the 3 B+ by 60 percent.

The GPU is getting a nice boost too. It moves from a Broadcom VideoCore IV that operated at a core clock speed of 400 MHz to a VideoCore VI that's set at 500 MHz. The new architecture allows it to output to a display at up to 4K resolution with a rate of 60 fps or to support dual monitors at up to 4K 30 Hz.

While we wish we could have tried some of the more resource-intensive emulators in Retropie in time for this review, there wasn't a Pi 4-compatible version at launch. However, the OpenArena Benchmark, which measures frame rates in a game that's a a clone of Quake III Arena, did run.

No matter how fast your processor, RAM and GPU are, if your storage is slow, everyday tasks like opening apps and files will be laggy. Like all Raspberry Pis, the 4 B's primary storage device is its microSD card reader, which is convenient but a bit constrained. According to the Pi Foundation, the 4 B has a top transfer rate of 50 MBps, which is double the speed of the reader on the 3 B+. There's no known limit on capacity.

With a more power-hungry processor and the need for at least a 5-volt, 3-amp power adapter, the Pi 4 should be expected to consume more power than its predecessors.

At idle, the Pi 4 B draws 3.4 watts, which is just 17 percent more than the 3 B+. Under load, that number jumps to 7.6 watts, but that's still only 19 percent more juice than its direct predecessor. If you want the lowest-power Pi, performance be damned, then go for the Pi Zero W, which consumes a mere 0.8 watts at idle and 1.6 watts under load.

Yes, this board gets warm, warmer than its predecessor. Thermal images mirror what we experienced; the areas of the board near the CPU get really warm, not just the top of the processor itself. The Pi 4 board reaches a toasty 74.5 degrees Celsius (166 degrees Fahrenheit). That's not enough for a serious burn, but kids especially should be sure to pick up the Pi by its sides only. The top surface of the Pi 3 B+ is much cooler, maxing out at 62.5 degrees Celsius (144.6 degrees Fahrenheit).

As with any modern computer, if you push the system too hard and the CPU or GPU get too hot, the computer will throttle down to avoid damage.

The Raspberry Pi 4 represents a giant leap forward, not only for the Raspberry Pi, but for single-board computing. For the first time, it's realistic to use your Pi as a secondary or backup PC (or perhaps a kids' first PC). However, the larger real benefit will come not from folks who use Raspberry Pi 4s in lieu of x86 PCs, but from all the innovators who harness the system's enhanced performance, I/O and graphics to create new iOT devices, media servers and robots. Kids building Pi projects in school will also have a world of new learning possibilities.

1. pls Confirm your Address carefully once you make the order, if package returned or have some problems caused by your wrong information, you need bear the responsbility.
2. If your address out of shipping company's service, you willneed pay remote fees. we will contact you before we delivered the parcel.
3. Delivery time maybe uncontrolled during the holiday or badweather, if you have not received parcel over scheduled time, pls contact us promptly.

Not exactly what you want? 1 request, multiple quotations Get Quotations Now >>